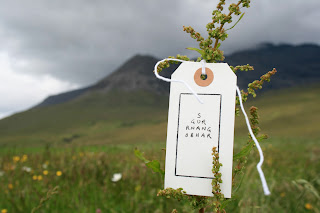 Sgùrr Mhic Coinnich
the bolt that blocks
so many traverses

to the mountains this pockled scree
flows, cascading over as many years
as there are rocks, but no, the phrase
can’t be made to hold – to the mountains
nothing...

for the peak is the smallest part
of any mountain and, beneath the peak,
the greater part of the mountain
lies hidden within

Culnamean (Grid ref: NG42SW 14). Site records can be viewed on RCAHMS. Former township
on the Allt a’ Mhuilinn; the name means Back of the Mountains. The closest hill is Sgùrr nan
Gobhar, Peak of the Goats, which slopes up to the Cullin ridge; Frank Fraser Darling refers to
the ridgeline as arcuate, curved, like a bow. Sgùrr Alasdair, Alistair’s Peak, named after Sherriff
Alistair Nicolson of Skye; Sgùrr MhicCoinnich, McKenzie’s Peak, named after the climbing guide
John Mackenzie of Sconser. The other mountain names are translated in the conspectus below. 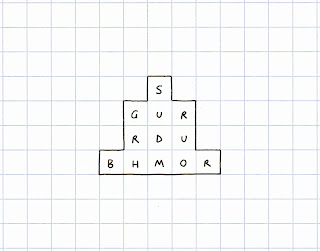 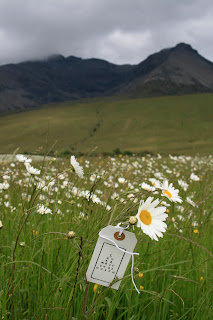 
A memory of my first visit to Culnamean, June 2011, with Emma Nicolson; the arable fields had
been allowed to become meadow, filled with ox-eye daisies, neòinean mòr. We heard a corncrake,
traon, croaking among the grasses. 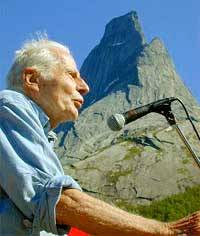 sand & marram frame views
well kent & fond to visiting climbers,
not all as eccentric in their treatment
of their tents as the philosopher
& climber Arne Naess

falling asleep
I could still see
the mountains

but the holes
couldn’t be shut
so I was freezing

& that was the first
of many, many
stupid things
(Arne Naess)

The campsite by the beach at Glen Brittle is popular with climbers. These verses are composed
from phrases in David Rothenberg’s introduction to Arne Naess’ thinking: Is it painful to think?:
Conversations with Arne Naess (University of Minnesota, 1993).


Sherry's Shadows of the Alps 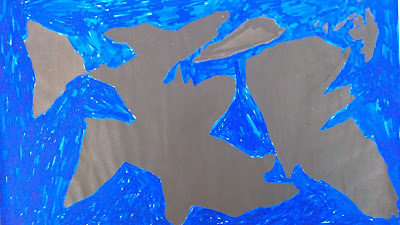 David Sherry's Shadows of the Alps exist as drawings, photocopies, and paintings; he grew up in
the Mourne Mountains and lives in Glasgow. 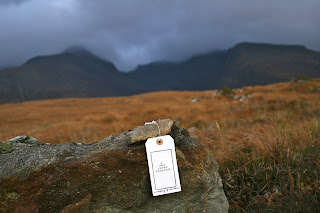 the first visitors to arrive on Skye
with the habit of referring to themselves
as 'mountain climbers', translated the Cuillin
into their ideal terrain 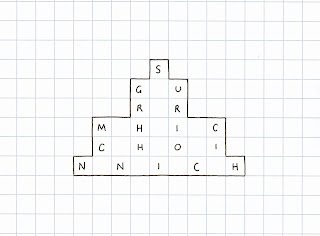 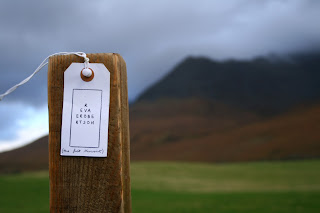 the alpinist cult was succeeded by Munroism:
mountain climbers & armchair loggers
tabulated an index of verticality

the Munroist doctrine nominated peaks
as data points, founding an arbitrary tradition
that becomes, for some, the pursuit
of a lifetime
their credo remains much debated;
their status quo is undermined
by the paradox, admitted by Munro,
that, although peaks can be measured & compared,
mountains are immeasurable,
their pursuit, even their definition,
is irrational

fitting then that the first comprehensive Munroist
should be a man of the cloth, Rev. A. E. Robertson
who listed God’s blessings in a rambling sermon
from Numbers

closely followed by another reverend
A. R. G. Burn

Munroism derives from the calculations of Sir Hugh Munro, a founding member of the Scottish
Mountaineering Club, who published the first edition of Munro’s Tables in the SMC journal of
1891, listing the summits over 3,000 ft recognized to be separate mountains. The definitions of
summits and tops have been matters of much debate, of the utmost importance to those who
pursue Munro bagging. 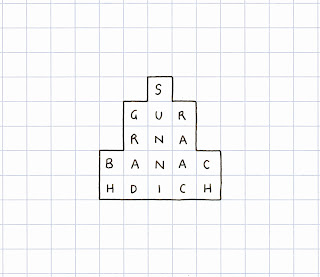 A CASTE OF PEAKS 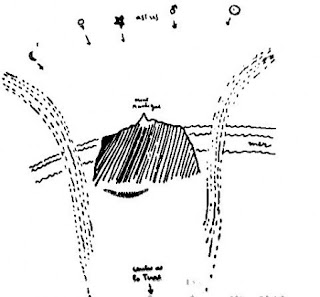 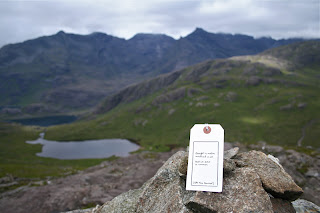 rebalancing the equilibrium
between climbing & viewing,
paying heed to Daumal’s notion:
thought is motion, movement is all
that we share in common

walking, not the physical pretense of walking,
but consciously harmonizing, walking at our own pace,
there comes an entire rhythm, lighting life
with joy & ease

but you cannot always stay on the summits
you have to come down again
so what’s the point?

while climbing, take note of all the difficulties
along your path, during the descent
you will no longer see them,
but you will know that they are there
if you have observed carefully

there is an art to finding your way
in the lower regions by the memory
of what you have seen when you were higher up;
when you can no longer see, you can at least
still know

Daumal's Mount Analogue, sub-titled A Novel of Symbolically Authentic Non-Euclidean
Adventures in Mountain Climbing (tr. Carol Cosman, Pantheon, 1960) is a foundational text
of mountain counter-culture. Pataphysics originates in the work of Alfred Jarry, who proposed
it as the science of imaginary solutions, of laws governing exceptions and of the laws describing
the universe supplementary to this one. These theories influence Daumal's experimental meta-
physcis, expounded in Mount Analogue. Here the final verses are based on passages from his
essay ‘The role of Movement in the complete education of man’, translated by Mark Polizzotti.

this guide favours viewing over climbing,
but it’s time to expose ourselves to a bodily encounter
composed in Bone Scale by artist-climber
Dan Shipsides

increasing pitch from femur : carpal
to carpal : femur
to precarious tarsal then metatarsal
then gone

Cìoch, massive pedestal interrupting the climbing routes up Sròn na Cìche, Pap of the Prom-
ontory, on the face of Sgùrr Alasdair. Shipsides is an artist who climbs; a recent exhibition at
Stephen Lawrence Gallery, Greenwich, refers to mountaineering and radicalism, including
Aleister Crowley. The photograph (above) is possibly the highest 'ground-bound' (non-airborne)
photo ever taken in the Cullins, made by Shipsides, using a 3m bamboo pole. Shipsides collab-
orates with the artist-climber Neal Beggs, whose work features in the guide to Sligachan. The
extract below is from Colin Will’s poem 'The Cioch, A’ Chioch', first published in Seven Senses
(Diehard, 2000). 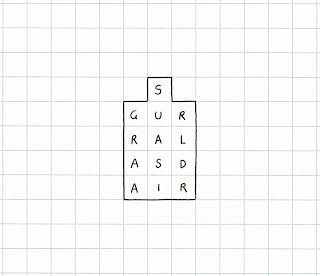 Colin Will, The Cioch, A’ Chioch

You are free, if you are brave, to stand up
on this steep rough rock.
Hands are not needed
except for reassurance.
This slab is so sound
you could run up, unroped,
facing in, looking up.

But back, behind,
there’s air below;
a thousand feet
until you’d hit
the crags and boulders -
and you’re no cartoon coyote. 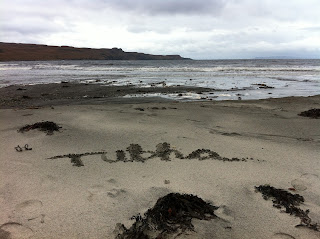 your eyes see the point, but what’s known
depends on rounding the promontory
beyond Càrn Mòr

for the full 4 miles reveals:
the ruined gable of the MacKaskills,
comes litoris

the ruined fort on the naze
& the stone-lined canal
that bleeds from the lochan boatyard,
with noosts for Macleod’s birlinn

Culnamean, departure point for the walk to Rubh an Dùnain; the point is visible in the photo-
graph. The MacKaskill clan motto, comes litoris, derived from their ancient role as 'coast-
watchers' for Clan Macleod. The fort, the boatyard at Loch na h-Àirde, the cave used as a Neolithic
smithy and the chambered cairn are described in more detail in the guide for Rubh an Dùnain.
Noost, boat stance, for birlinn, clinker-built longships. 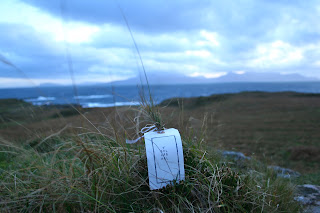 Rúm, remains of volcanic frenzy
collaging a rock ecology
of sandstone, granite & magma,
the sandy topsoil & spitted slopes
of Hallival & Askival are covered in green patches,
flushed by birdshit, riddled with burrowed nests
which emit the eerie calls of the shearwaters
renaming Trollabhal every night

It is sometimes said that the name ‘Rúm’ means isle of the ridge. Askival, Peak of the Ash. The
noisy calls of shearwater, sgrabaire, when they return to their burrows at night are thought to
have given Trollabhal its name, Troll Peak. On the hill of Orval there is the ruin of an old funnel-
shaped stone deer trap, eileirig.

if the eagle is the eye
of the storm, I am nothing,
sitting on the edge
of the cliff waving
like someone lost

if the eagle is the door
of heaven, I am everything
that must pass
under the lintel
marked found

The poem by Linda France, titled ‘Two Sightings’, from You are Her (Arc, 2010), describes the
experience of sighting an eagle over Beinn Bhuidhe, yellow hill, on Eigg. On Skye and Rúm there
are white-tailed sea eagles, iolaire sùil na grèine (eagle of the sunlit eye), which were for a time
locally extinct, and had to be actively reintroduced. In the mating season they can be seen locking
talons, tumbling down through the air. The golden eagle, iolair bhuidhe (sometimes iolair dubh),
was also absent from the islands for some years, seemingly due to the effects of the pesticide ingested
in their shearwater prey. Though the species later returned naturally, its numbers remained inhibited
owing to local pesticide use. Geoff Sample made a recording of white-tailed eagles on Canna, for
the Cape Farewell project Air falbh leis na h-eoin / Away with the birds, in collaboration with Hanna
Tuulikki 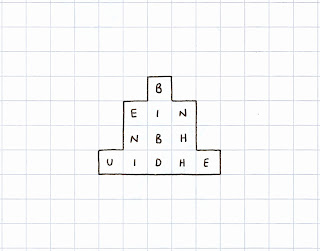 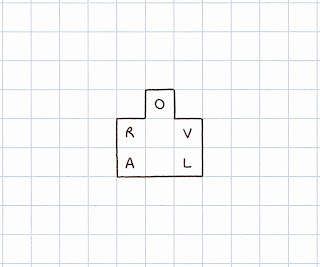 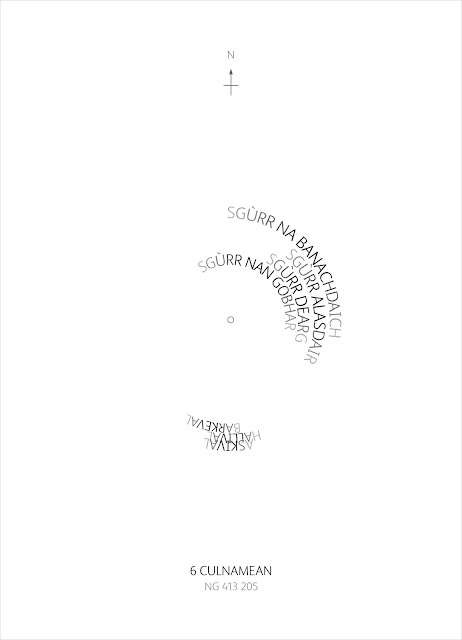 This conspectus is composed from the names of some of the mountains that  are
visible from this location. The centre-point marks the location of Culnamean.
The typography represents the view as it is experienced by the human eye,  giving
an approximate impression of distance and scale. Mountain ridges are  indicated
by overlapping names. The gradation of hill slopes is suggested by  the use of grey-
scale, with the peak in black.

Click on this graphic to view the original and, if you wish,  print it out for use in
situ. A booklet containing all 14 conspectuses is available from ATLAS Arts. The
14 conspectuses have also been archived in an  album, indexed here. A complete
list of the mountains referred to in the Culnamean guide is given  below, with links
from each one to its OS map. English translations have been  given where possible.
A gallery of word-mntn drawings, including mountains visible from Culnamean,
can be found on the drawing page.