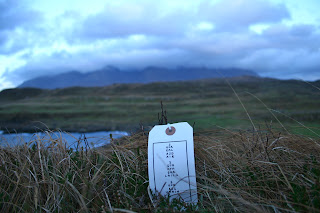 
from the Skye Cuillin to the Cuillin of Rúm
janus-like, look on the way you're heading,
north-east over Loch Brittle
up the scree ridge of Sgùrr nan Gobhar
upon which the Cuillin rise, forming
that stupendous arris of peaks

janus-like, look back the way you came,
south over the heavy sea from which the Cuillin rose
forming that stupendous arris of peaks


Rubha an Dùnain's a longish hike over rough ground
crossing burns that feed or flood from mountain lochs,
so take care, for June's relaxed tramp to the azure headland
may become November's epic hike in the scary dark
– head-torches required –
as the rush of rain erases the fords beneath
tattered white spume

take note of these plashing burns,
for when night comes you can still know them
by their wild tunes and fixed intervals,
recalling the path's thread as you re-cross


Rubha an Dùnain. (Grid ref: NG31NE 1). Site records can be viewed on RCAHMS. It translates
as Fort of the Point. This walk inspired the artist Alison Lloyd to make a re-enactment, 'Dùn
Bàn, Sleat and Rùbha an Dunain looking South from Glen Brittle, Skye', contouring a round-
about in an East Midlands town, Sunday 11 December, 2011. More information here.


some burn names were lost
with the families that left

confluence of a burn with a lost name
fed by Lochan Coir' a’ Ghobhainn,
and Eas Buaile Bhainne


The peninsula was Mackaskill land, but by the mid-nineteenth century most of the crofts were
abandoned. One effect of emigration in the Highlands has been the loss of knowledge regarding
place names, their memory or their meaning. This walk is a survey of those burn names which
remain and the lochs that feed them: The other place names of hills and isles are: Soay, Sheep
Island; Eigg, Hollow Island; Càrn a' Ghaill, Rocky Hill of the Storm; Canna, Porpoise Island;
Vatersay, Water Island; Flodday, Flat Island; Sanday, Sand Island; Pabbay, Priest Island;
Mingulay, Big Isle. The pesky rabbits damaging the chambered cairn on Càrn a' Ghaill are
coineanach 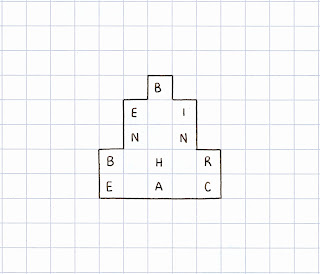 
John Berger, somewhere in the highlands 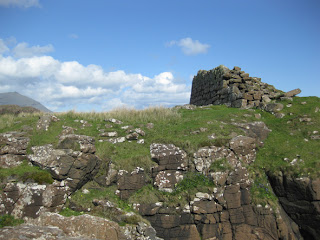 
there are castles
there are the lines
which could be
and have been
defended, deaths,
but there are no
final barriers

uncounted time
heavy with a sense
of loss


This verse for the ruined fort was composed after a passage in John Berger's essay, 'Somewhere
in the Highlands', And Our Faces, My Heart, Brief as Photos (Pantheon, 1984). Luke Allan’s
advice was composed after a hike back from Rubha an Dùnain in the dark, with Alison Lloyd. 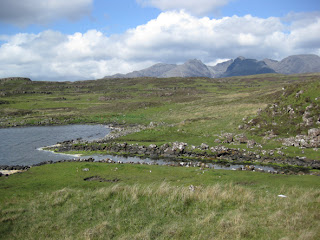 view of the Cuillin from Rubha an Dùnain, NS


an archaeological palimpsest on the beak of Skye,
the opening's hidden among flecked boulders
so bend your head below the lintel
and creep your mind inside the neolithic,
into the cairn that was filled with stone
after the last beaker was carefully
placed within

as if its bones
would pull me down
into the hollow 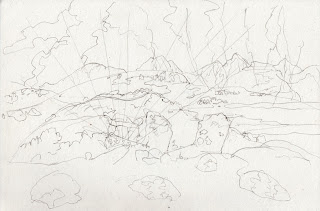 
for the site records of the neolithic chambered cairn on Rubha an Dùnain, at Camas a' Mhùrain,
Bay of the Marram Grass, see RCAHMS. The artist Norman Shaw’s account can be read here;
and his recording made inside of the chamber can be heard here. The verse on the chamber was
composed from an email by Alison Lloyd; and the view from an email by Norman Shaw describ-
ing the conspectus view of the Skye and Rùm Cuillin, rendered by the artist below. 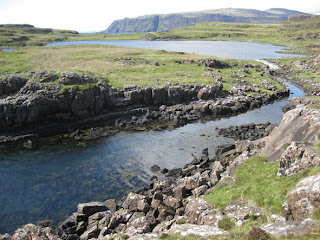 
wrack in freshwater
barnacles gripping on
the trunk of an oak,
riddles solved in the loch’s
channel that translates
pool into dock & harbour

anchoring what we know
under the proven cover
of what was once
fastened in secrecy,
as overlapping timbers
render clinker-hulls worthy

followers
of the raven

shelter from
the wind’s claim


Loch na h-Àirde is on the east of the peninsula; much attention has been given to it recently as an
archaeological site associated with boat repair, most likely predating the Vikings, although it is
often referred to as the Viking Canal or Boatyard. Gavins Morrison discusses the site in his essays.
The description of the loch and oak trunk were inspired by Seton Gordon's account of his visit in
The Charm of Skye (1929); there is now no oak tree. Noost, Norse for a boat stance; clinker-built,
Norse style of boat construction, with overlapping planks. The Vikings released ravens as an aid to
navigation: see Kathleen Jamie’s essay ‘Aurora’, Sightlines (2012). The ruin of Francis Tolmie’s
home can be seen near Rubha an Dùnain; a collector of Gaelic folk-song, she was the last of her
generation to live on the old McKaskill croft

Francis Tolmie, One Hundred and Five Songs from the Western Isles of Scotland


panorama of the Hebrides 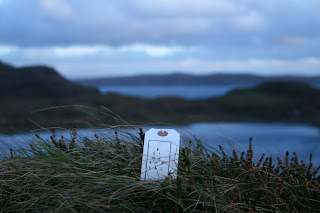 
put that headland past your prow
where you strain with sweat-drenched brow
and lift the sails upon her now
from Uist to the Sheldrakes!

Soay
an isle riddled with lochs, where fires
were built to signal for a ferry boat

An Sgùrr
the spine of Eigg and its neb

Lì a Deas, Lì a Tuath
near the loveliest slope of all, Eabhal


The quote is from ‘Birlinn Chlann-Raghnaill’, ‘The Birlinn of Clanranald’, Alasdair MacMhaighstir
Alasdair, tr. Hugh MacDiarmid, The Golden Treasury of Scottish Poetry (Macmillan, 1940); 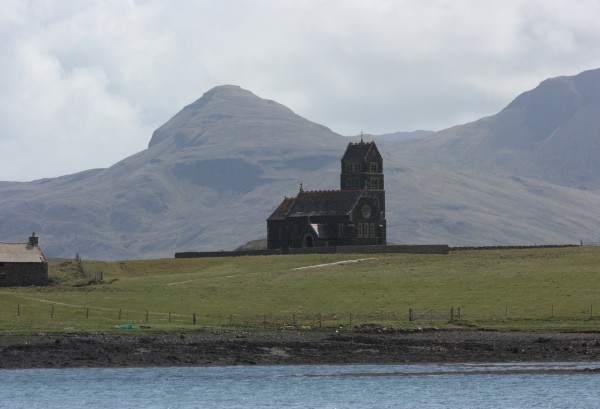 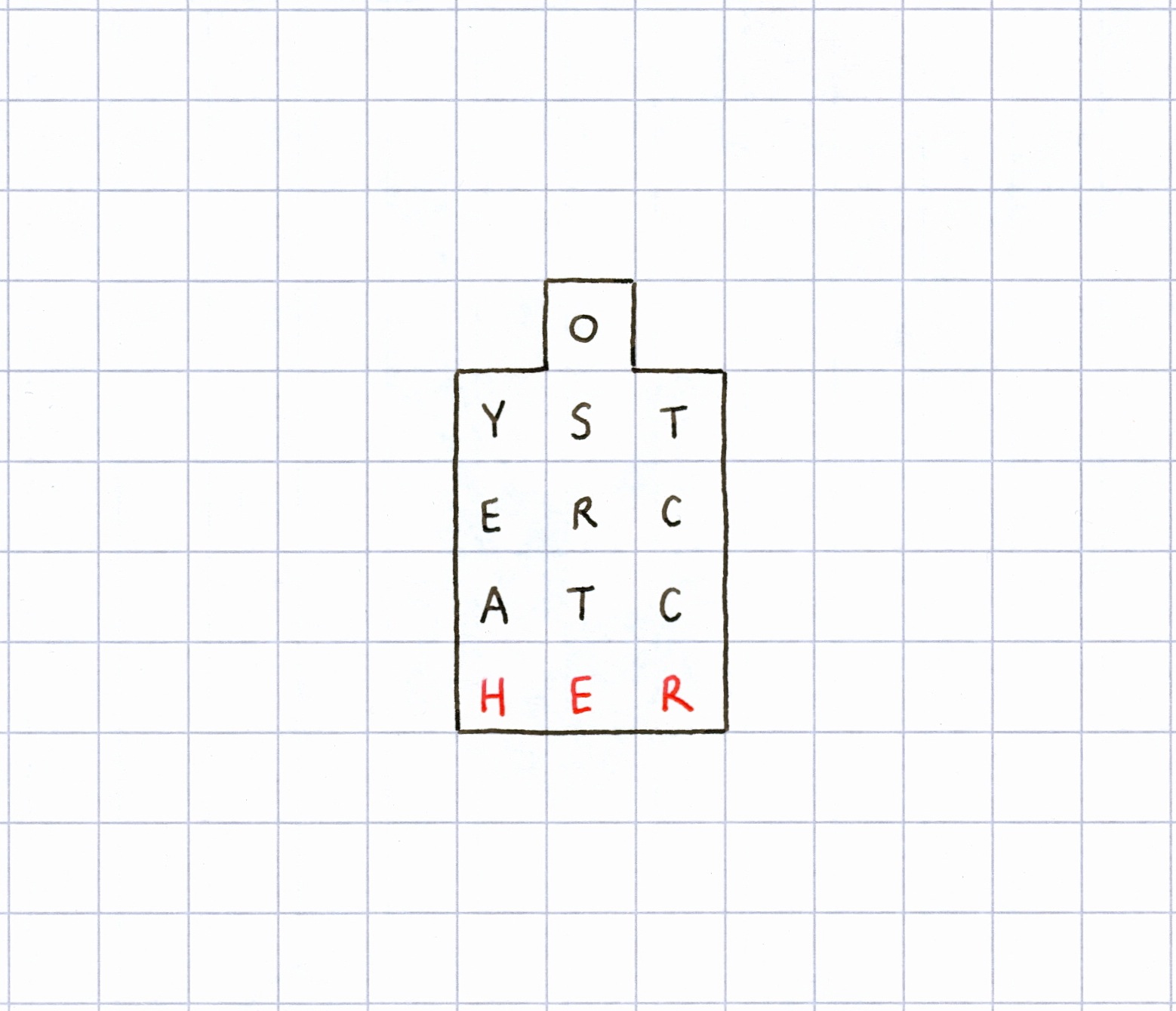 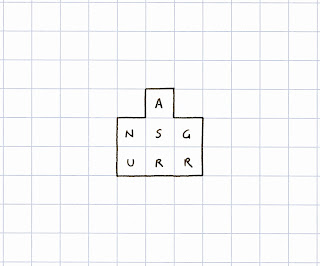 
the Greek poet George Seferis
visited Eigg during his service
as vice-consul in London,
guest of Steven Runciman,
don, aesthete, Byzantinist
and the son of the island's
absentee landlord

Seferis's experience of the island was reimagined
by Edwin Morgan


Seferis stiffly cupped warm blue May air
and slowly sifted it from hand to hand.
It was good and Greek. Amazed to find it,
he thought the dancing sea, the larks, the boats
spoke out as clear as from Aegean throats.


Morgan's complete poem can be seen in Sonnets for Scotland (Mariscat, 1984). Steven Runciman
introduced Cecil Beaton to the fashion for wearing Fair-Isle sweaters. It was also said of Runciman
that when he gossiped, names that did not so much drop from his lips as diaphanously float. For a
more recent web-based artwork about Eigg see Alexander Stevenson. 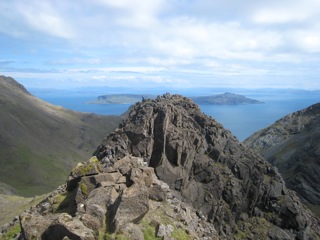 
the poet Peter Levi spent some weeks on Rúm
in the 1960s ringing shearwaters,
a sojourn he recorded in a long poem,
from which these are extracts

We walked on in file, following
a path so silent and so overgrown
it seemed this whole island like quiet stone
hung in its sea as a hawk hangs on the wing

And now the hill had opened like showers
suddenly concentrating in heavier rain,
as if the divinity of this rough terrain
were grasping by half-knowledge what was hers,

and flung her wide arms out, making the crest
fall in a slope of yellow or of blue,
and made it lie as gradual and true
as that long line which streaks the fainting west.

There was no smooth pallor or fantasy,
but the direct and dying sun, outright
shadow perspectives etched in fields of light
from an airy ridge, remote simplicity.

And further now below, foliage of woods
still broke and darkened in luxurious seas
where the tall hills like mental images
upreared their never speaking solitudes.

And always as we climbed we strained to hear
(but too far off and now not visibly)
fierce intonations of the self-echoing sea,
austere voices of the shallow water.

We came out at last into a place
where yellowish grass gloomed in a level
floor among ridges like a lightless shell
not far above us darkening into space.

High up behind its peak the moon floated
making the wind seem solemn and slow,
but we were caught in hollows of shadow.
This mountain was as silent as the dead.

And in strange touches of a reflected light
the topmost of the rough grass on the entire
motionless circle shone with sudden fire
and we through light moved onward over it.

But the mountain was windy and bare,
and we were crouched scarcely speaking,
a flung pebble struck with a quiet ring,
there were no birds in the whole empty air.

So there for a long hour we waited
as if by mental visions we had done
with the day's heat and iron-burning sun
here first received among the invisible dead.

to fill the whole dark with their wings and cries
penetrating these cliffs with a broken call,
and suddenly settle, populating all
the northward faces, so thick out of the skies

We crouched waiting for the wind to die
or the bright moon to sink into a cloud,
but the savage wind still bellowed as loud,
and the remote moon trailed its clear glory.

And all that night the moon shone
while we in the shadow of the breeding-slopes
wandered and murmured, nursing our hopes,
and the heavy-bodied wind bellowed on.

Between dusk-coloured rocks like a ruin
in the place where the mountain was most bare
there was a sudden whirring in the air
and the first shearwaters came in.

And now and then as quiet as breath
one shearwater flighted down to the ground
between long beams of light flickering round
in allegories of surprise or death,

eyes confused in the torchlight,
silently fingered marvellous thing
he seemed too weak or light for ringing
then whistled and vanished in receptive night.

Big Trolleval and Arkeval seemed near,
the remote moon was walking on the sea
paving the waves with bright transparency
terrible as justice, nervous as fear.

Space seemed alight, it was as if
the enormous wind had in his clumsy dance
quite brushed away the night's thin substance
dropping it broken round some distant cliff.

Far out to sea absolutely nothing
moved but the wasted water,
mile beyond mile there was no shelter,
mountain beyond mountain, nothing.

Light and time outnumbering sense
fell in a complete quiet,
as if this sailing moon could never set,
or time were intellect and providence.

Then down again from the massive wind we crept,
half-mastering stiff legs and drowsy sight,
slope below slope, moon-shadows and night,
and in the hearing of a stream we slept. 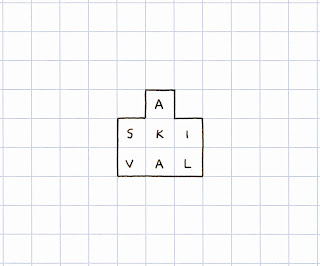 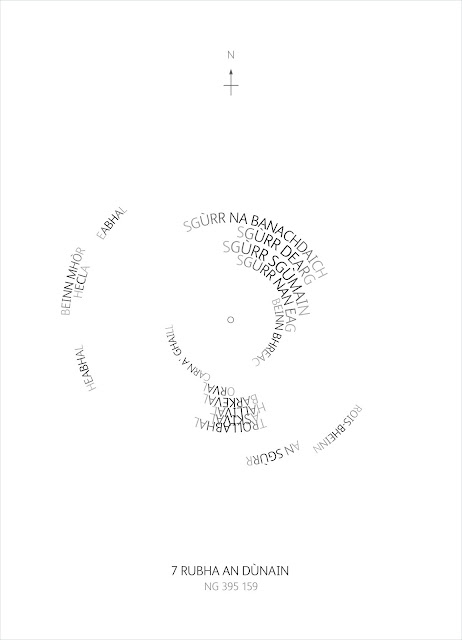 This conspectus is composed from the names of some of the mountains that  are
visible from this location. The centre-point marks the location of Rubha an Dùnain.
The typography represents the view as it is experienced by the human eye,  giving an
approximate impression of distance and scale. Mountain ridges are  indicated by
overlapping names. The gradation of hill slopes is suggested by  the use of grey-
scale, with the peak in black.

Click on this graphic to view the original and, if you wish,  print it out for use in
situ. A booklet containing all 14 conspectuses is available from ATLAS Arts. The
14 conspectuses have also been archived in an  album, indexed here. A complete
list of the mountains referred to in the Rubha an Dùnain guide is given  below, with
links from each one to its OS map. English translations have been  given where
possible. A gallery of word-mntn drawings, including mountains visible from
Rubha an Dùnain, can be found on the drawing page.