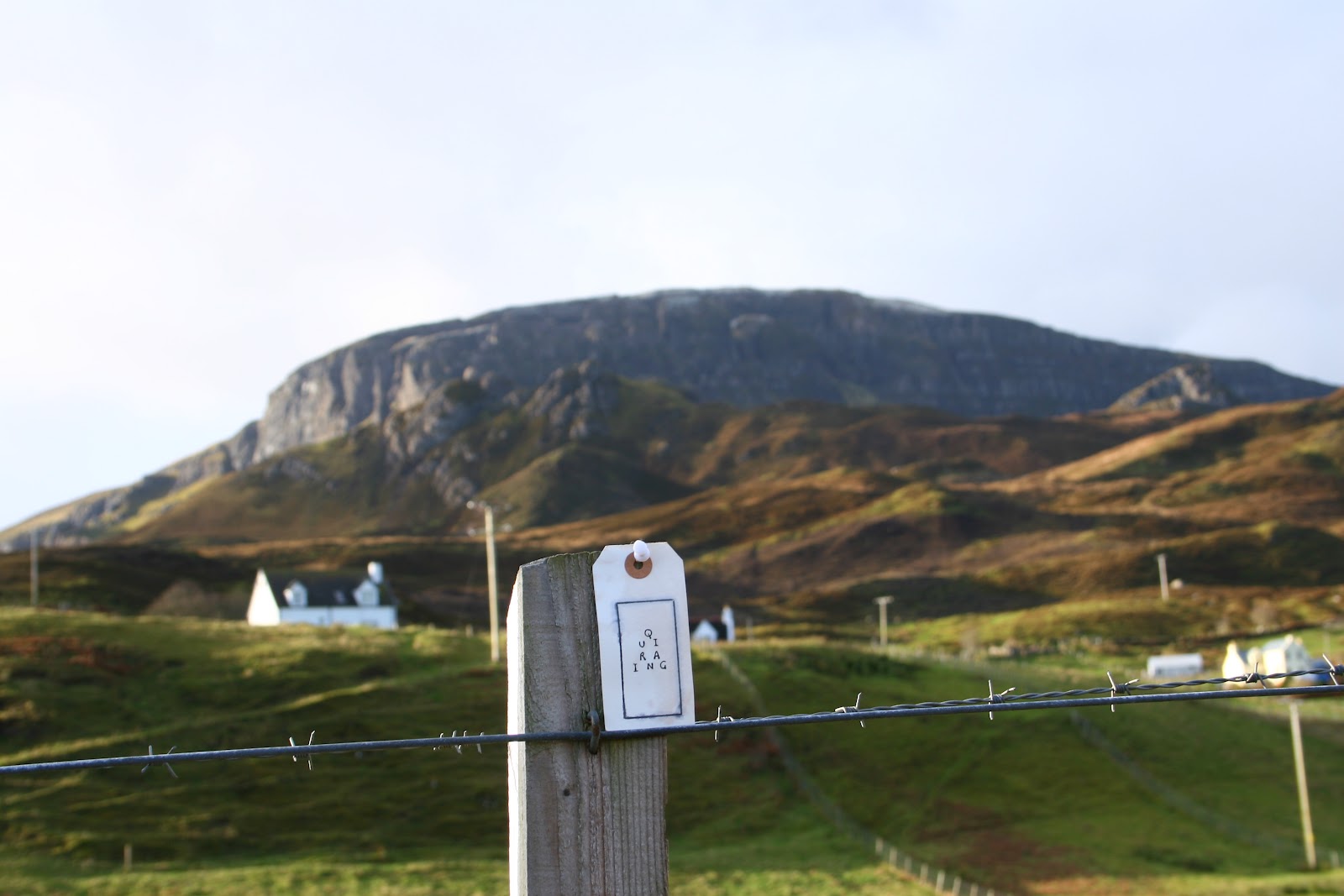 
begin with these stones
as the world began


begin with these names
as the poets began 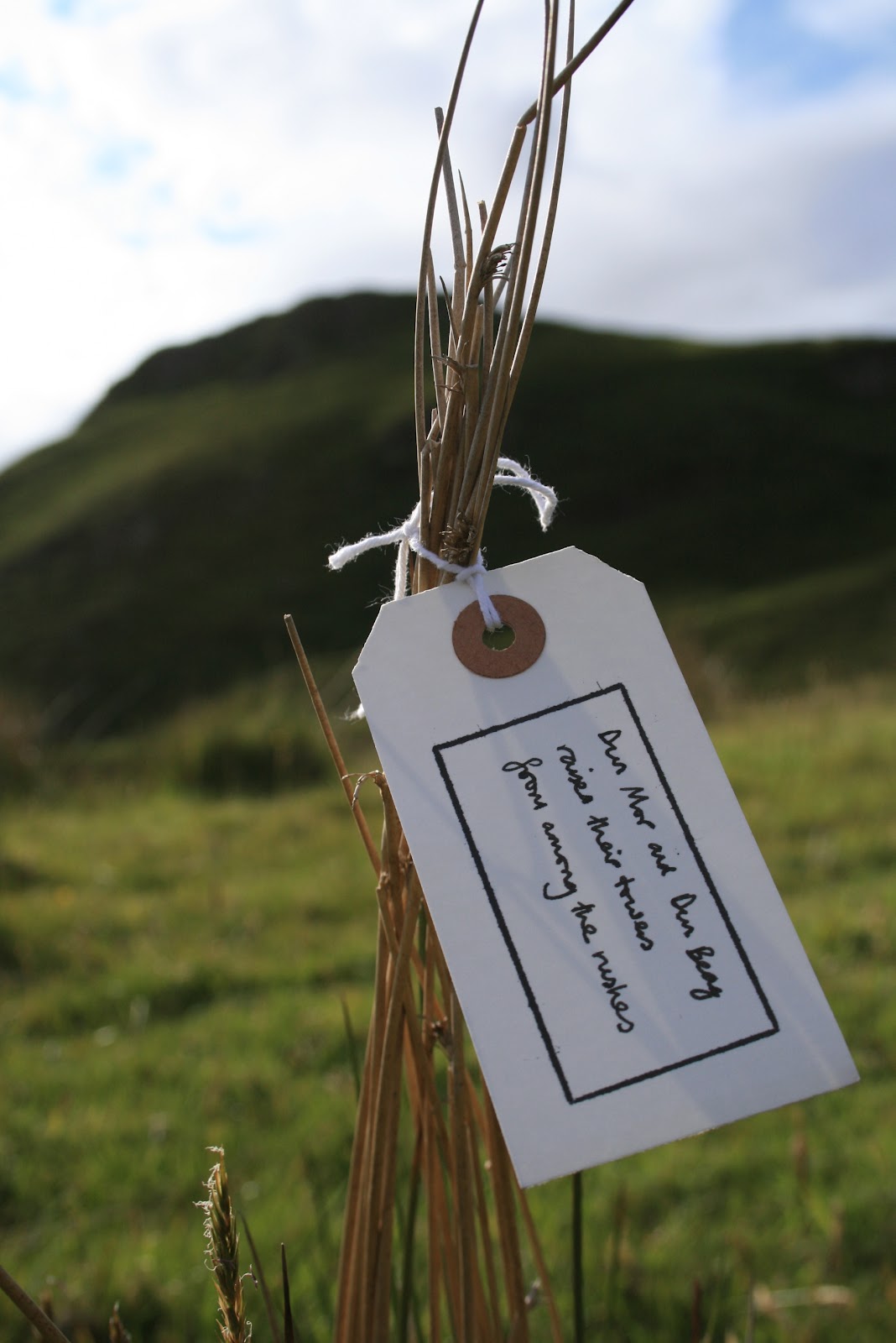 
we begin again with the Cuith-raing,
emblem of strength & ruin; it takes a slip of time
to climb the tussocky terraced incline
from sharp rush to soft mosses

the volcanic castellations of An Dùn Beag & Dùn Mòr
make a fort of the massive escarpment:
it takes a lavic mode of growth
& tertiary flows to set the needles slipping
down from Meall na Suiramach
to the sea


An Dùn Beag (Grid ref: NG4668), The Little Fort, with Dùn Mòr, The Big Fort, nearby, as at
Ullinish, in the guide to another fort named Dùn Beag with a Big Fort a short walk away; for
An Dùn Beag site records see RCAHMS. The Quiraing, or Cuith-raing, Round Fold, the name
is said to derive from its use as a shelter, concealing cattle from Viking raiders. Poucher trans-
lates Meall na Suiramach, the hill above the Quiraing, as Height of the Maiden. The epigraph
is from Hugh MacDiarmid’s modernist epic ‘On a Raised Beach’ (Stony Limits and Scots
Unbound, Gollancz, 1934). Little is known about Davy Polmadie, a minor poet of the hutopian
school. 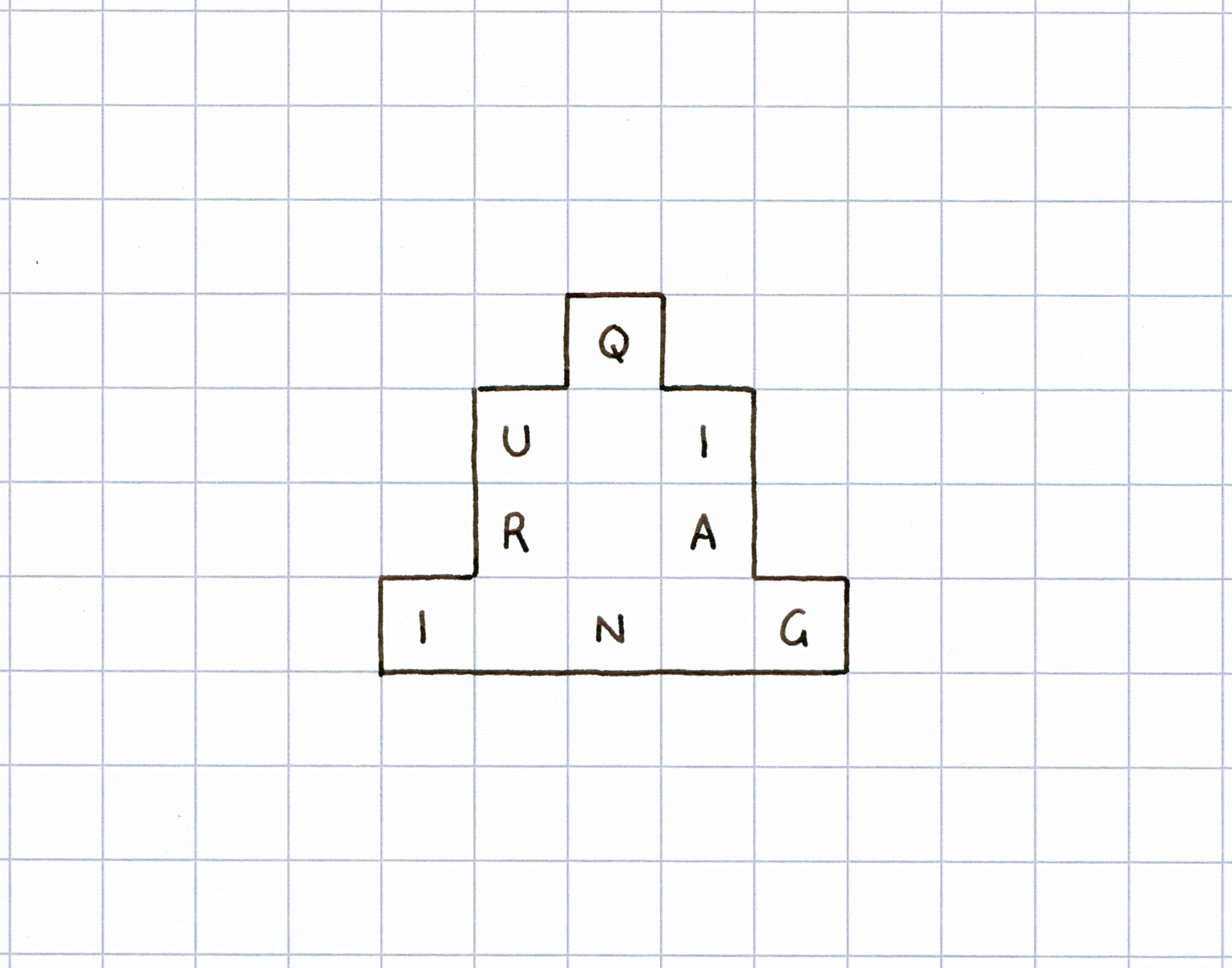 every dùn should have a beacon dùn
of its own, lofted above, as here,
where the sheep-cropped grassy knoll
is topped out by the solid lump
of Dùn Mòr


Composed from a passage in an interview with the Norwegian philosopher and mountain climber
Arne Naess, with David Rothenberg, first published in Is it painful to think: Conversations with
Arne Naess, Father of Deep Ecology (Allen & Unwin, 1993) we see the wide sea before we hear it
because waves are different;
but, as so often, today's wind has stolen
the rocking-chocking sound of Staffin
away from the dùn

at the point of An Corran
there was a mesolithic midden
of shell, chert & flint

south is eachy-peachy Beinn Edra,
a bridge arched in Trotternish
the longest ridge in these isles,
criss-crossed by the old ways of bealachs
marked by mossy cairns

north, above Loch Hasco, Grianan nam Maighdean,
is the sun bower of the maidens:
a soller to tell tales in or arbour for lolling,
viewing hills, picking crab apples,
tormentil & celandine
across the strait of Poldorais, Eilean Fhlòdaigearraidh,
the green wing of the swan sweeps across
the Inner Sound, flighting toward South Rona,
with its lighthouse below Meall Acairseid, the little knoll
of the harbour
north of Rona is Red Point
& another light

The place names include: Trotternish, Thrond's Ness; An Corran, The Point; Beinn Edra,
named for its position in the Trotternish Ridge, Hill Between Others, with the most famous
bealachs, or passes, Bealach Úige and Bealach nan Coisichean; Loch Hasco, High Shaw
Loch; Poldorais, Doras' Pool, the strait between Staffin and Eilean Fhlòdaigearraidh, Float or
Fleet Garth (house & yard), which The Vikings saw as a swan’s wing. Martin Martin describes
the isle as ‘sweet with hay’. Poldorais is thought to derive from an early Christian saint, Turos,
Dòrais. Rona is the Rocky Island; Rubha Rèidh the Smooth Headland. The name grianan,
sun-bower, from 'grian', 'sun', occurs in a number of places in the Highlands; some interpr-
etations suggest a constructed form, possibly a sunny chamber or soller (open balcony exposed
to the sun), however, as the sites are usually on mountainsides it seems more likley that they
were places for viewing, or female rites. The most famous of these sites is Deidre's Tigh
Grianach, House of the Sun, in Glen Etive: see The Road North, Bonawe. 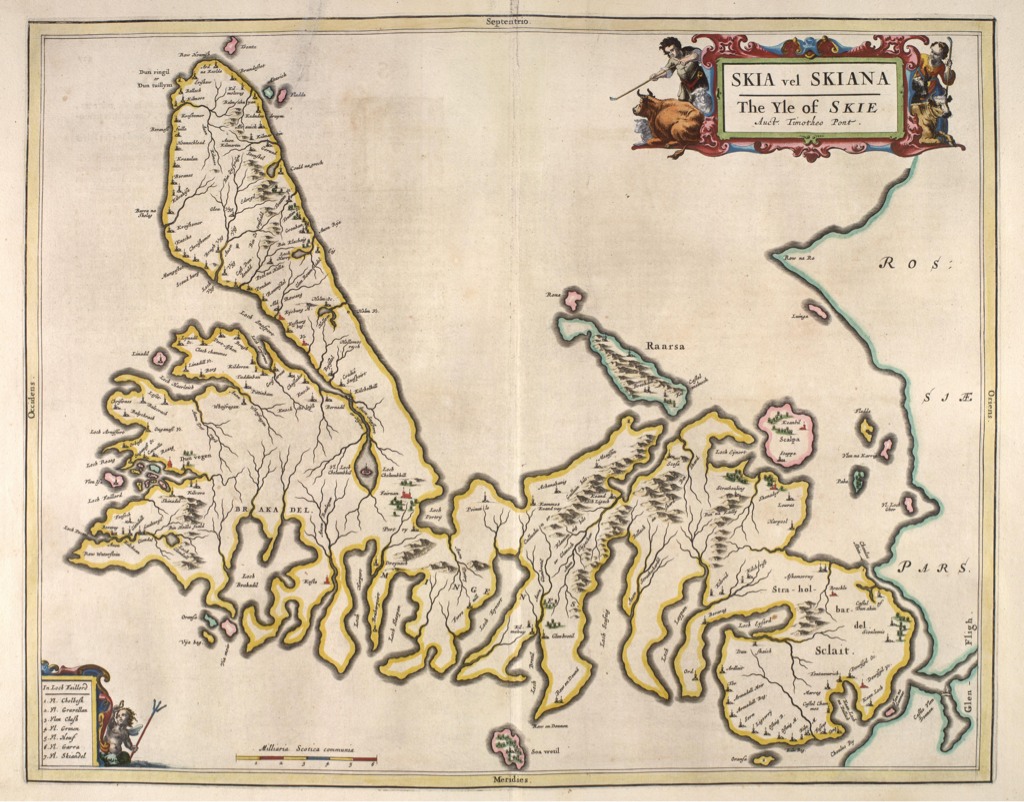 on the old maps, such as those illustrated by Pont,
the length of Trotternish points flat
out into The Minch

sat on this dùn, the isle seems to tilt and swell
back through the quadrants, toward its rightful
mercatorial consciousness

raising its northern finger to full index length
asserting its right to the same longitudinal angle
as Raasay, Applecross & Gairloch


Pont is recognized as the first topographer to produce a detailed map of Scotland based on surveys.
On one of my tours of Skye researching A Company of Mountains I was lucky enough to view a
private collection of maps at Orbost House, assembled by George Kozikowski. I was struck by the
gradual evolution in the cartographic outline of the island.

from the ridge of Beinn Edra, on the clearest day
you can see the 80 miles to the white stacks
of Kilda


panorama of the mountains of mainland Scotland 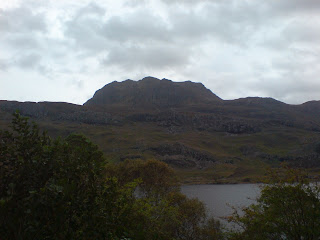 Seton Gordon says that, given good weather,
the view from here is wide and remarkable,
over the sea lochs, Ewe, Gairloch & Torridon,
to hill upon hill, south-east, east & north-east,
rising in beauty

the dome
of Ben Alliginn

the spear of Slioch
often in cloud

the forge
of An Teallach

Translations of the mountain names are given in the conspectus below. The quotation from Sir
Archibald Geikie is taken from his A Geological Map of Scotland (1876). 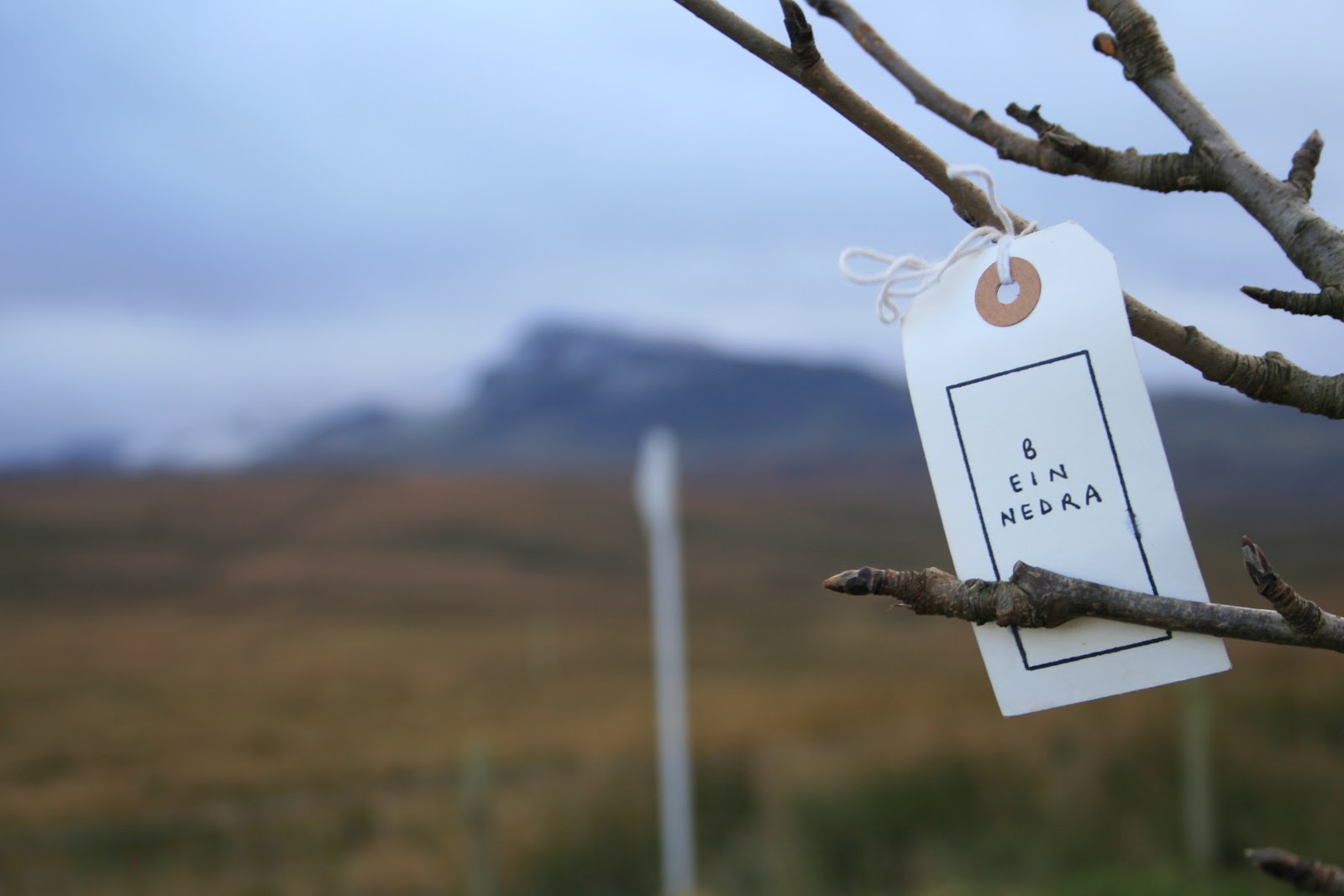 the mountain said:
I hear you coming
listen well,
I am a concrete abstraction,
there is nothing beyond
my summit but blue
infinity.

the mountain said:
feel me well
with your heart-feet,
clump and stomp
strive for my zenith
and know this
know this
that your action is the real mountain.

the mountain said:
it’s a life’s work
to be a mountain,
to accept the feet,
the stone-fall, the heart-feet,
say well the proximate
fall and cause
as it clatters down my side
to a gully unknown.

it’s a life’s work
to love the mountain well
to love the shadow, the master
of all mountains
to listen
to feel
to say well
to taste infinity
on a summit.

Composed by Maoilios Caimbeul, for A Company of Mountains. Maoilios also published a renga
word-map of the area around his home of Flodigarry, near An Dùn Beag, for The Road North;
a recording of him reading the Gaelic original can be heard here. He is a founding member of the
Staffin Eco-museum, an innovative embedding of local history and culture in the landscape,
initiated by Meike Smeidt in 2006. Two examples of their work are included below.

my little treasure, photograph by LA 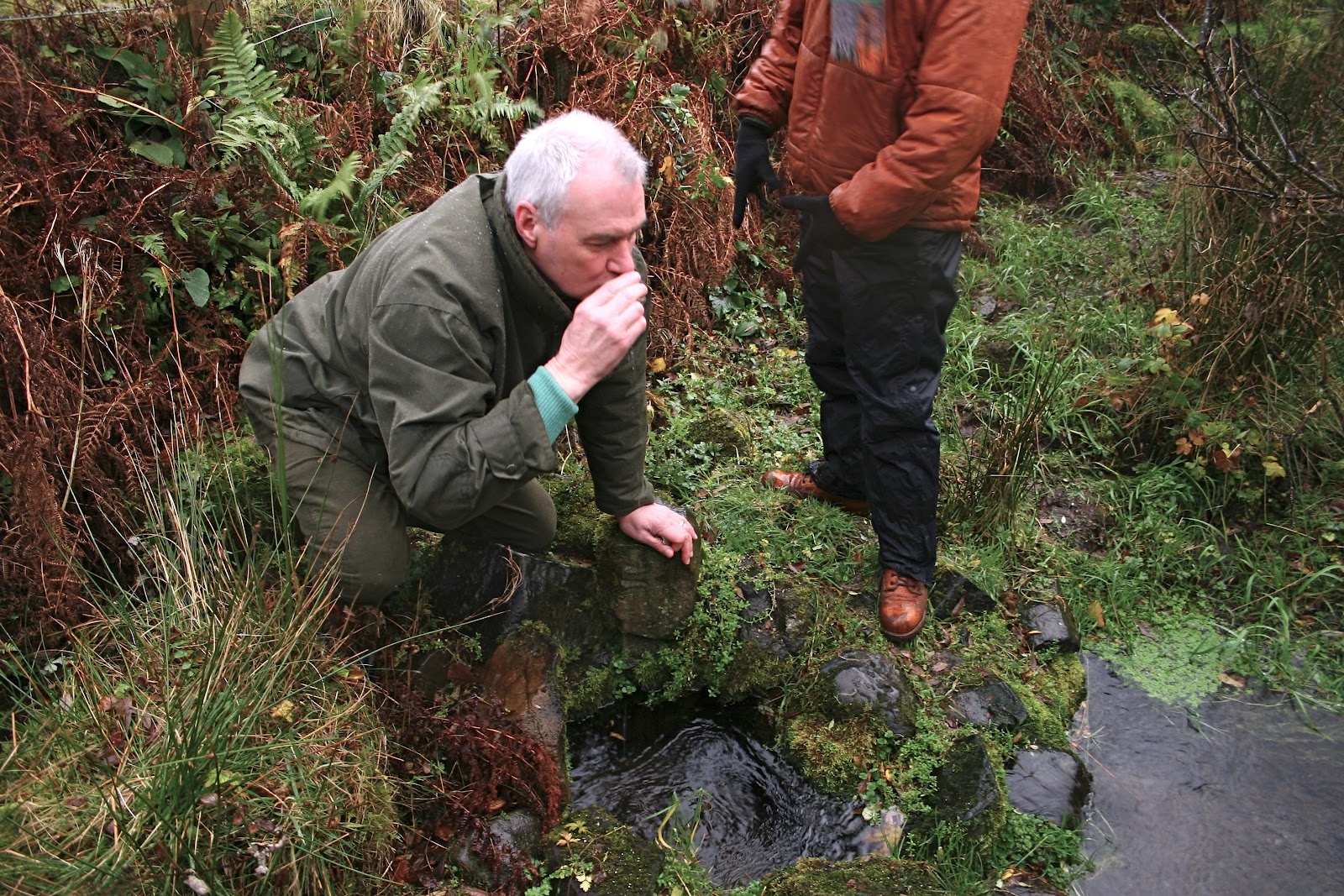 hidden behind the Dùnan mounds lies Loch Shianta,
the enchanted loch, in whose grey-green waters
you may still glimpse descendants of the 7 fair trout
with which MacDonald stocked the lochan

in his tour of the Hebrides Martin Martin
described Shianta

this is done after drinking
of the Water

there are no miracles to be sipped these days,
but there is the walk through the fields,
where the yellow buckets wait
for lambs

there are the 7 streams
flowing under the hazel wood,
feeding the well sheltering in the calm
under fuchsia bells

there is the blessing of Ben nuzzling
your fist open

and, where the burn reaches the sea
there are eider ducks to prove
the water's goodness


Martin Martin, a native of Skye, published this description of the well in his A Description of the
Western Isles of Scotland (1703). dessil, deosil, to move sunwise, east to west, considered prosp-
erous; the opposite term is widdershins. The description also draws on Seton Gordon's essay on
Tobar Loch Shianta in Highland Summer (Cassell, 1957). There  is a vigorous fuchsia, gucan fiùise,
growing around the well; the sheepdog from the local croft is named Ben. For more on the well see
the road north. 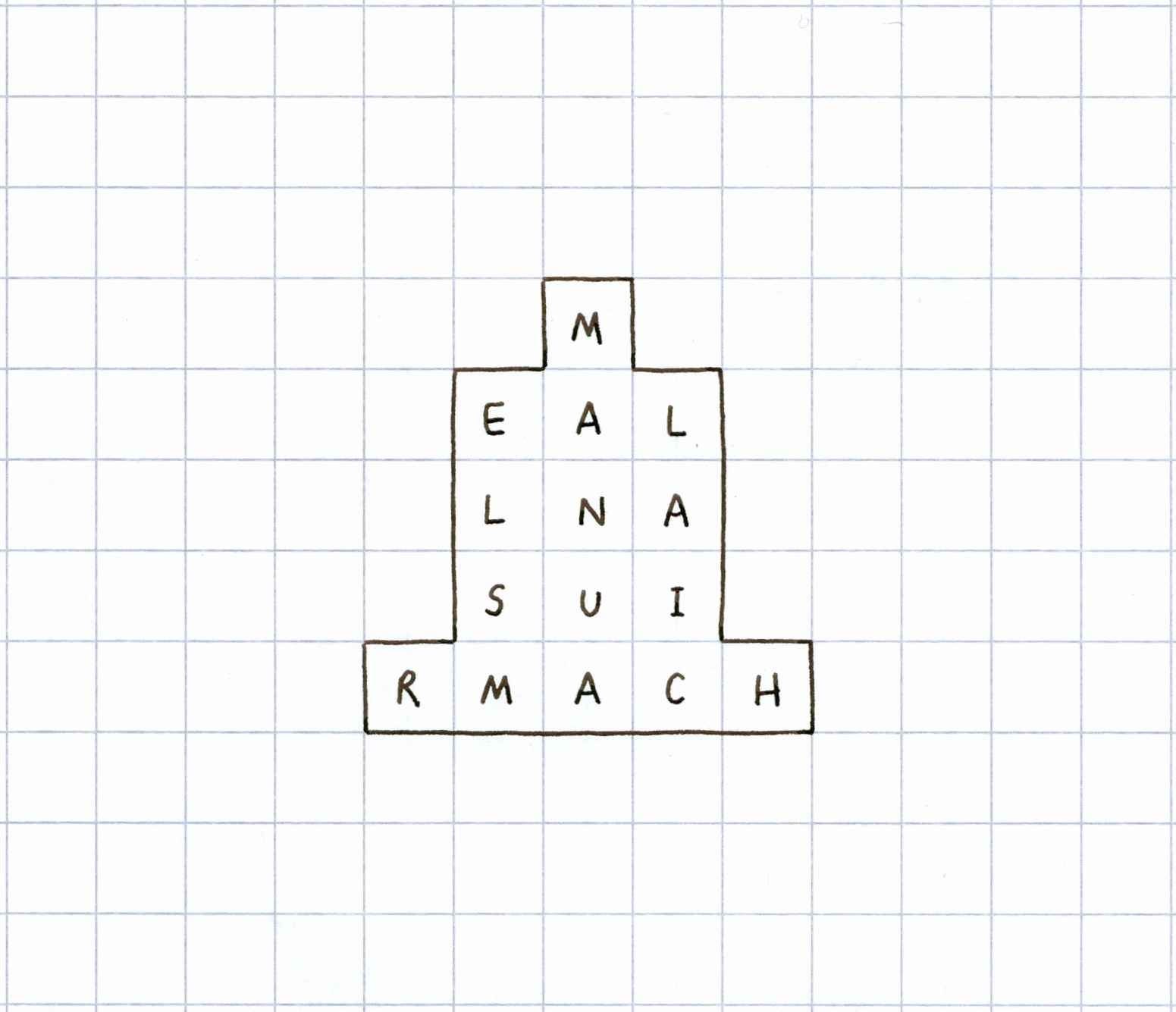 a word for the spring

in the spring’s honour, an offering from the poet
Thomas A. Clark 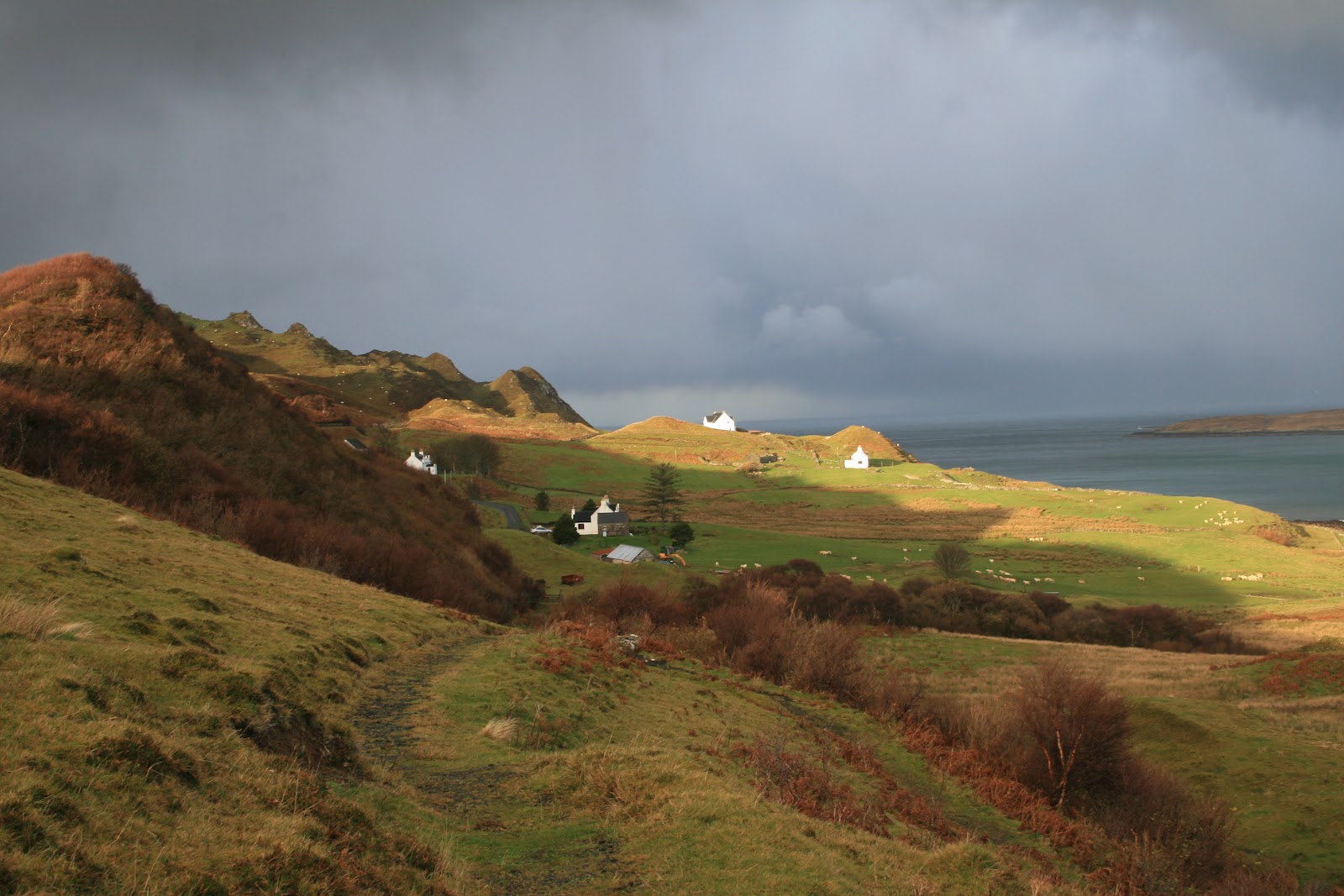 some wells are so overgrown, to find them you may
need to take up divining, as poet and spring-teller
Valerie Gillies explains

you need to be prepared to search for them;
I was taught to use divining rods
by a friend who’d spent years
putting up fences in the Borders
and used divining rods to find the best place
to put a fence stob

anyone can do it: the rods are an extension
of our own arms & hands

The names of wells and springs were collected from members of the community, initiated by
Urras an Taobh Sear - Staffin Community Trust, 2006; it is by no means exhaustive. Maoilios
Caimbeul notes: not all wells are holy wells. In the old days water was taken from the well,
carried by pail to the house. I remember doing that when I was young in Staffin – the well was
about 400 yards from the house, although it had no name as far as I know. Only a few wells had
a reputation as holy wells. I'm not sure why this was. Although they were holy in the middle ages
– in the Christian era – they may have been deemed sacred in pre-Christian times, but the myth-
ological reasons are lost to us, if there were any.' Valerie Gillies published a survey of wells and
springs, The Spring Teller: poems from the wells and springs of Scotland (Luath, 2008); her
notes on divining appear in an interview with Jenny Renton. 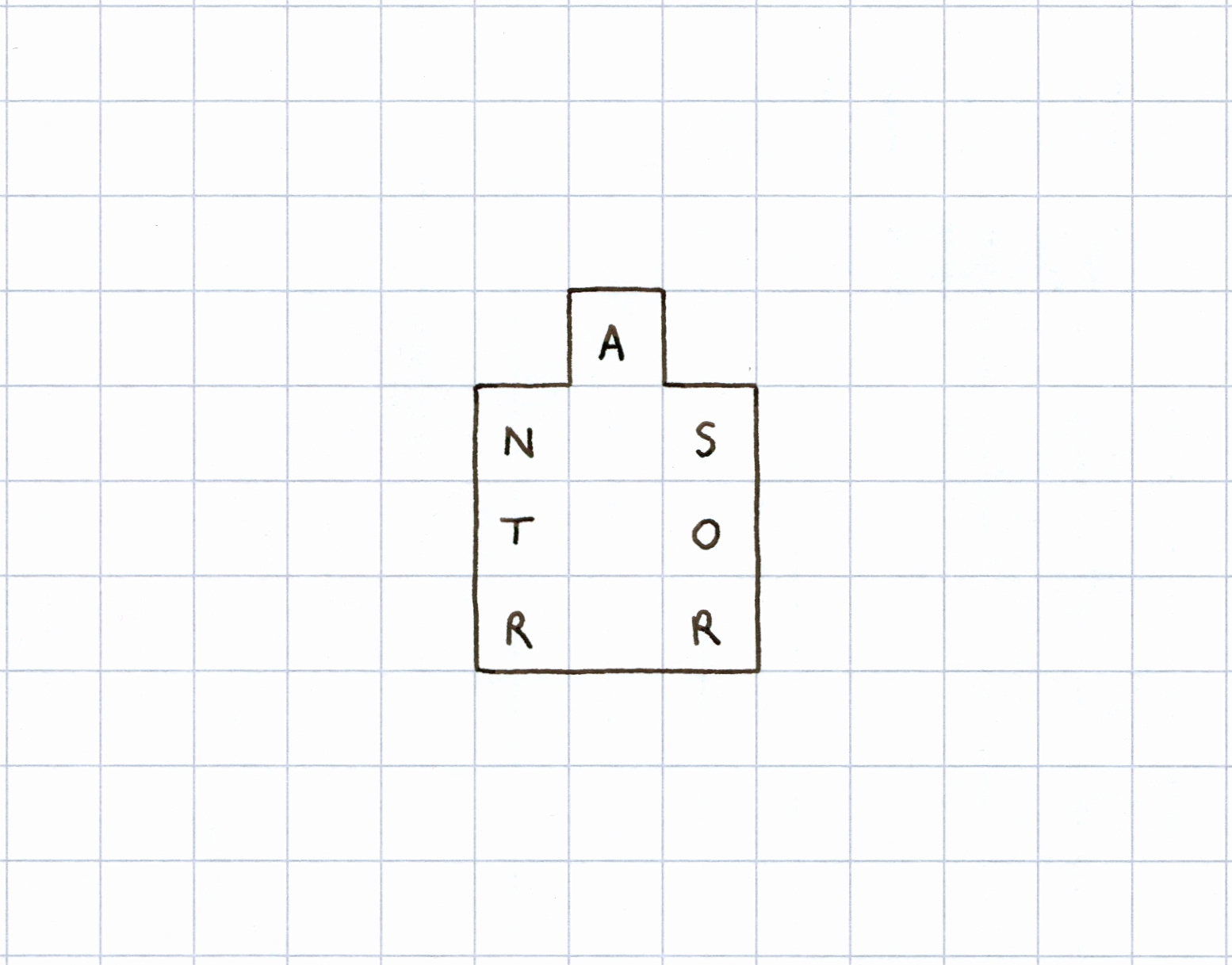 a well for every house
makes need

into the ordinariness
of a daily task

a drop from the springs 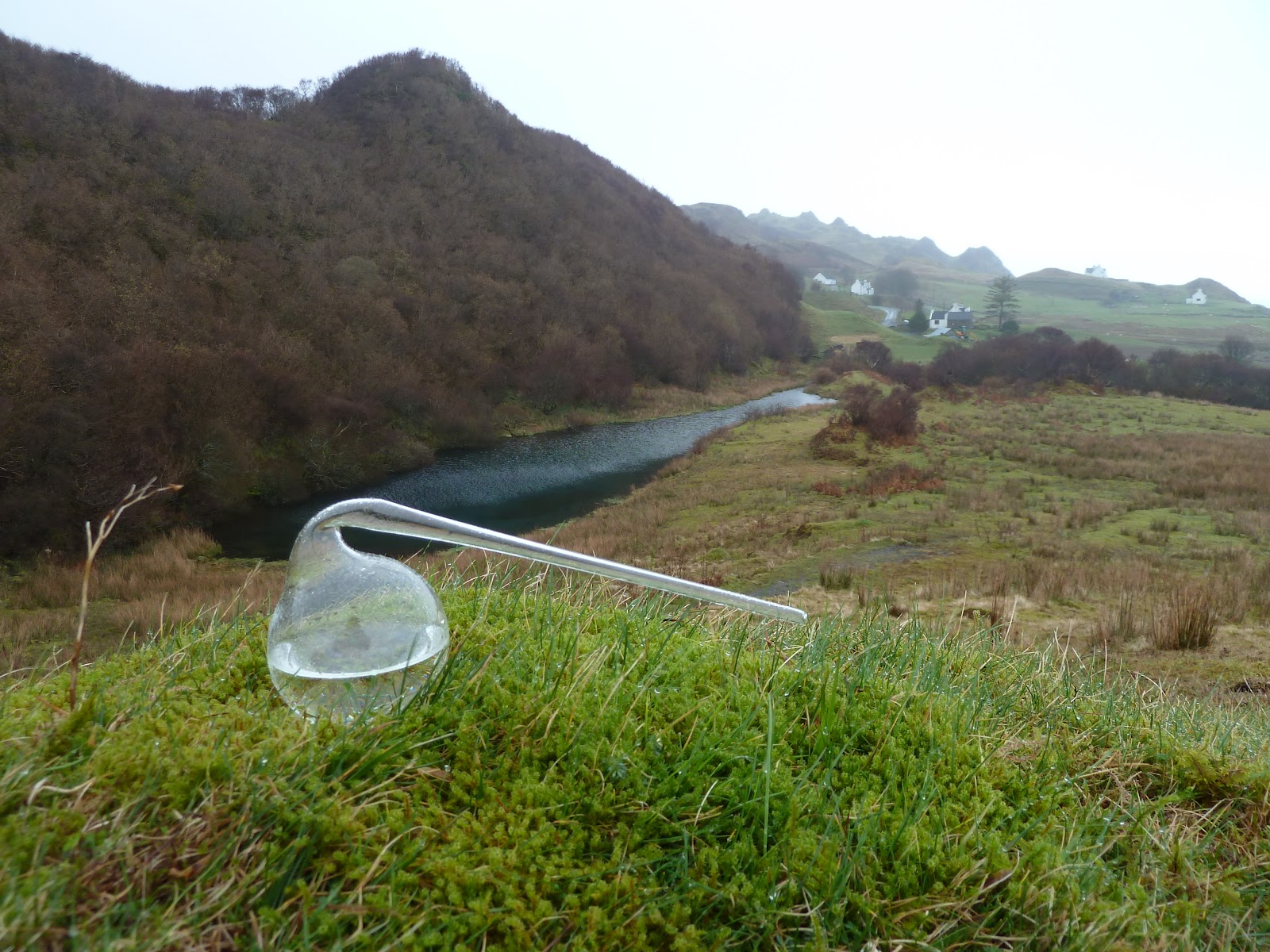 This photograph documents one of Ramm's glass 'retarts', containing samples of water from
Tobar Shianta, with Loch Shianta in the background. The vessels are based on those used by
the Edinburgh chemist Joseph Black, now held in the collection of the Royal Museum of Scot-
land. They were produced as part of her residency at Sabhal Mor Ostaig on Skye, mapping the
island’s water. http://www.jessicaramm.com/ 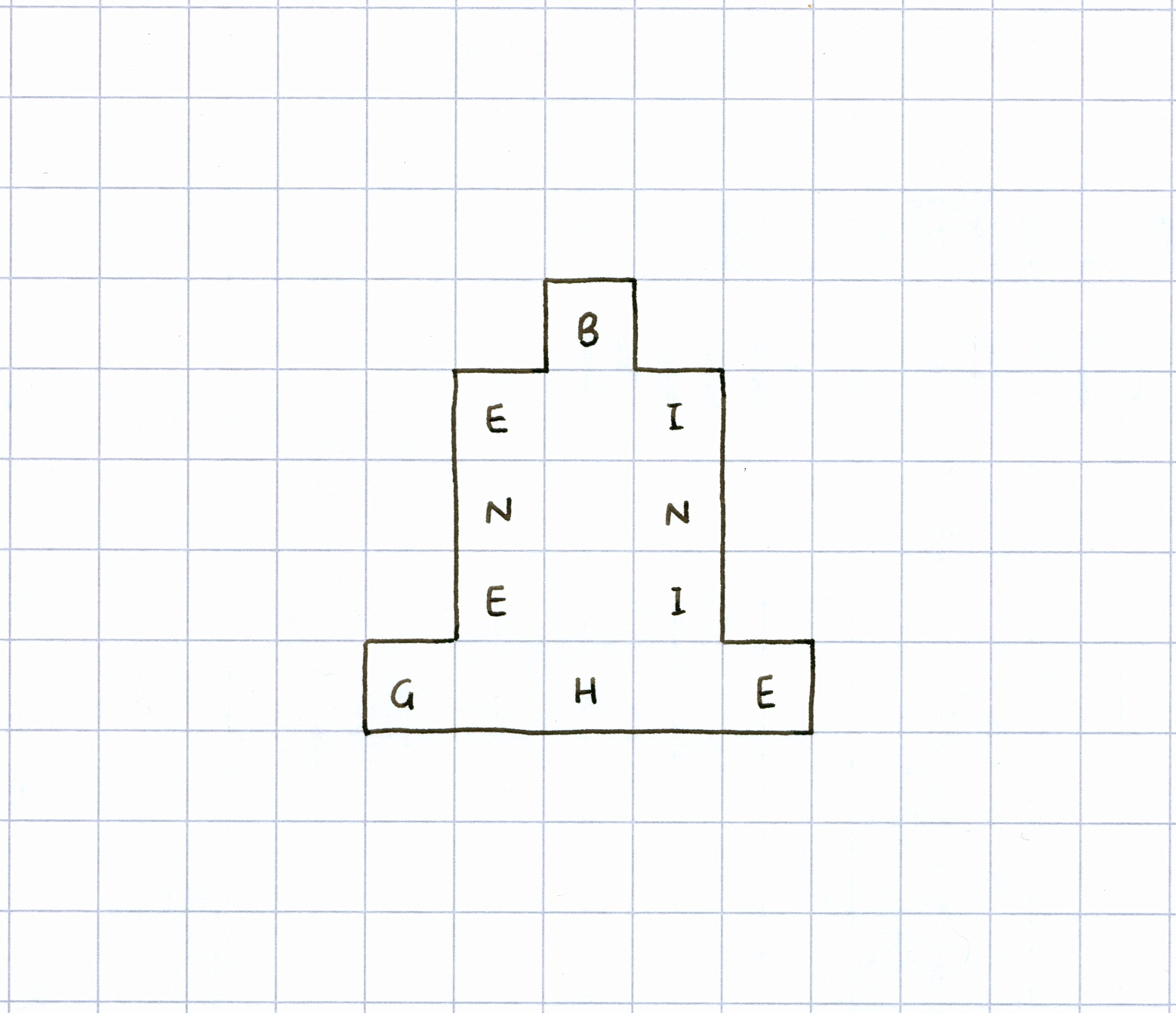 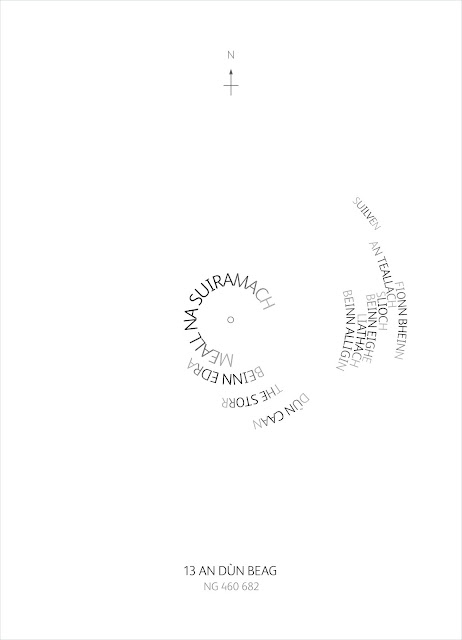 This conspectus is composed from the names of some of the mountains that  are
visible from this location. The centre-point marks the location of An Dùn Beag.
The typography represents the view as it is experienced by the human eye,  giving
an approximate impression of distance and scale. Mountain ridges are  indicated
by overlapping names. The gradation of hill slopes is suggested by  the use of grey-
scale, with the peak in black.

Click on this graphic to view the original and, if you wish,  print it out for use in
situ. A booklet containing all 14 conspectuses is available from ATLAS Arts. The
14 conspectuses have also been archived in an  album, indexed here. A complete
list of the mountains referred to in the An Dùn Beag guide is given  below, with links
from each one to its OS map. English translations have been  given where possible.
A gallery of word-mntn drawings, including mountains visible from An Dùn Beag,
can be found on the drawing page.

Còmhlan Bheanntan | A Company of Mountains
commissioned by ATLAS, Skye, 2012