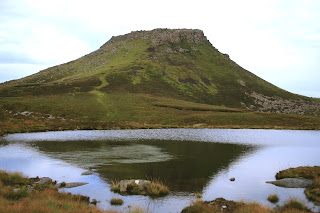 Dùn Caan offers its imageto the sky in the dark   pool of Loch na Meilichdelighted by the cap’s viewBoswell performed a solo   Highland SchottischeDùn Caan’s name may derive from Canu, a king referred to in Annals of Ulster. For site records of the hill and
the battle fought on its summit see RCAHMS (Grid ref NG53NE 6). This viewpoint on Raasay, Isle of the Roe
Deer, is the only one located off Skye. The distinctive flat-topped volcanic plug of Dùn Caan gave it the nickname
Raasay’s Cap. Boswell & Johnson visited the island on their Highland tour in 1773; the verse is based on a poem
Ken Cockburn composed on the summit, published on the road north. Gavin Morrison discusses Johnson's visit
in his essays. panorama of ‘Hallaig’ from Dùn Caan


Hallaig (after Somhairle MacGill-Eain); poem AF (after SM), photograph, LA‘Time, the deer, is in the wood of Hallaig’There's a board nailed across the window I looked through to see the west And my love is a birch forever By Hallaig Stream, at her trystBetween Inver and Milk Hollow, somewhere around Baile-chuirn    (Sorley MacLean, tr. Seamus Heaney)


Hallaig (after Somhairle MacGill-Eain); poem AF (after SM), photograph, LAthe flat palisade of the summit overlooks the 12 places whose namesform the skeleton of Sorley MacLean's   elegiac masterpiece, ‘Hallaig’litany of a heartbroken landscapedevastated by the hated Rainywho cleared the townships the poem   lovingly commemoratesyears ago now, I climbed the path,more kin to a purling burn,
and sat with my back to the trig,
holding the poem open,
looking around me,
along the length of Raasay
across to the mountains of Applecross   & the Cuillin massifI realized the poem was embeddedin Dùn Caan's complete conspectus,& as I located each name
on the map, it lit up
in my mindas Sorley summoned the procession
of the dead to endlessly pass by,
alive, if only in his magnificent
incantatory speech & my remembrancing
eyes

Allt Hallaig   the Burn of Hallaig


Hallaig (after Somhairle MacGill-Eain); poem AF (after SM), photograph, LAadded to these, the unnamed home,‘Tha bùird is tàirnean air an uinneig’the window, now unboarded, that looked   to the westMeg & I ate our picnic as the rainslid down the windshield,parked by the cottage at Oskaig;        we followed the poet’s gazefrom Àird Ghiuthai & An Àird’s wing,over the beacon of Dùnan an Aisilidh,on between Ben Lee & Glàmaig,down Loch Sligachan to Sgùrr nan Gillean& the fourth pinnacle,   the Knight’s Peakthat day a life came into perspective,looking over to Sorley & Renee’s final home,snug at Peighinn a’Chorrainn,where Glàmaig & Oskaig are framedin different windows& the Battle of the Braes is   by the garden gateHallaig, Sorley MacLean, tr. Seamus Heaney; Hallaig (see here and here). I made a poem-label bearing each
of the names and Luke Allan photographed in the direction of each place, from Dùn Caan. You can view the
complete panorama of labels here. The Clearances on Raasay predate the island's purchase by George Rainy
in 1846, but it was he who brought in workers from the Lowlands and England, bringing about what Norma
MacLeod defines as a 'definite break in tradition'; see John MacInnes' review of MacLeod’s Raasay: The
Island and its People (Birlinn, 2005). The name 'Hallaig’ may derive from Norse,  Holy Bay; MacBain gives
Oskaig as either Osk's Bay, or The Desire Bay; Àird Ghiuthais, Fir Height or Pine Height; An Àird, The Point.
The Knight’s Peak is on Sgùrr nan Gillean. Translations of the mountain names are given with the conspectus
below. Peighinn a’Chorrainn, or Peinachorainn, the poet's final home, is also referred to in the guide to Dùnan
an Aisilidh, which begins very near it, and which looks back toward Dùn Caan and Oskaig. For more on the
Battle of the Braes see Gavin Morrison's essays. 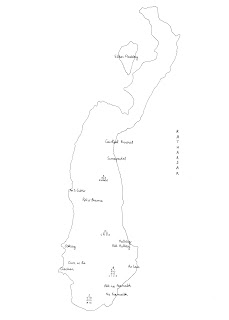 word-mntn (Glàmaig); poem AF, photograph LAin a later retrospect, Sorley describedhis childhood view from Raasayas a conspectus & the foundation   for his poeticsRaasay is a centre-point, with such a wonderfulsituation in relation to Skye & the mainland   of Wester Rossfrom Raasay we could see the Cuillin,from Sgùrr nan Gillean to Bruach na Frìthe& further south-east, the great landscape   of Blà-Bheinn & Garbh-Bheinnfrom Raasay we could see the coast of Skye,from Beinn na Caillich in Broadfordto Rudha nam Bràithrean in Staffinfrom Raasay there must be very fewstretches of sea in the Highlandsmore spectacular than the Clàrach,   the southern sound    (Sorley MacLean)This description is adapted from an interview with Sorley MacLean by Donald Archie MacDonald, ‘Some
Aspects of Family and Local Background’, published in Sorley MacLean: Critical Essays, ed. Raymond J.
Ross & Joy Hendry (Scottish Academic Press, 1986). Rudha nam Bràithrean, Headland of the Brothers;
translations of the mountain names are given with the conspectus below. 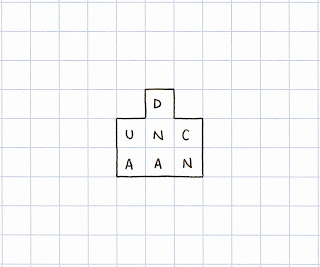 Luke Allan's vision of the Cuillin 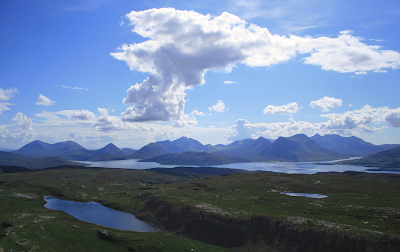 
when Proust caught sight
in a foreign market town
of a spire above the trees
it reminded him of the spire
from the church of his childhood
and he exclaimed, simply,
the church

so from the summit of Dùn Caan
look out over the Cuillins'
undulating cloud shadow, Glamaig's
distant lifted pinnacle,
and exclaim, silently,
the world

(Luke Allan)Composed after a stay on Raasay in August 2011. Story about Proust and the spire is taken from Swan's Way
For 'the dim glen's lamp' (below), see Trevor Joyce's poems of Sweeny Peregrine: a working of the corrupt
Irish text (New Writers Press, 1976) 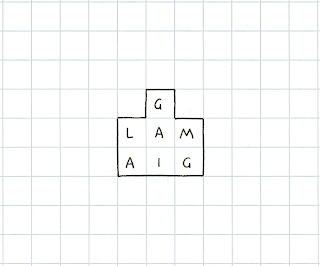 
Trevor Joyce's vision of the woods of Raasay 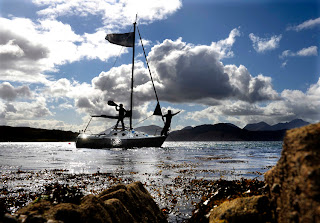 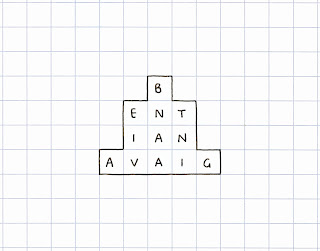 word-mntn (Beinn Tianavaig), AFStrummer of Raasay
Hallaig (after Somhairle MacGill-Eain); poem AF (after SM), photograph, LAlook from Dùn Caan along Raasay's spine,beyond Inverarish & Beinn a Chapuill,is the road Callum made by hand,   from Brochel to Arnisha way of life may someday flourishbeyond the road end, beneath the gneiss slabs   of Beinn na h-Iolaireat the township of Umachan, far from the Westway,the ashes of Joe Strummer were scatteredby the ruined croft built by his   great-great-grandfatherCalum's Road, constructed by Malcolm MacLeod, as described in Roger Hutchinson's Calum's Road
(2006) and Timothy Neat’s When I was young: voices from lost communities in Scotland: the islands
(Birlinn, 2000). Paul Camilli writes an intersting blog on life off-grid on Raasay, life at the end of the
road. Joe Strummer, founding member of The Clash, discovered his Skye Nicolson ancestry late in life
and, although he never visited, he had his ashes scattered on Raasay. Bandmate Paul Simonon painted
this view and left a Clash album lodged in the township's last standing gable. 'London Burning' includes
the lyric: "I'm up and down the Westway, in and out the lights. / What a great traffic system, it's so bright.
/ I can't think of a better way to spend the night, / than speeding around underneath the yellow lights."
(1979). It is interesting to compare the band's romantic insurrectionary spirit on albums such as
Sandinista with Sorley MacLean's anti-Fascist poetry of the 1930s.


the island not taken

word-mntn (Meall Acairseid); poem AF, photograph, LAin the early 90s Jimmy Cauty & Bill Drummondcame to Skye, seeking an island on which to found   a new visionthey sailed from Portree in a fishing-boat,over the Sound of Raasay to the Isle of Rona,   which was for salethey shared a vision of the island as the basefor the next chapter in their creative adventure; a cross between The Thunderbirds isle   & something not yet dreamedon the crossing the distinctive formof a killer whale surfaced alongside the boat   & followed themit was the first time either of themhad been close to a killer whale;a porpoise or dolphin would have felt welcomingbut this killer sent a different message:   they were being warnedlanded safely on Rona’s south tipthe fisherman agreed to collect themfrom the main bay, Acarseid Mhór, at eleven   the next morningall that day they fought their waythrough heather, birch, bracken & bushesunder attack from battalion after battalion   of midgesthe night Bill spent on Rona was filled   with disturbing dreamsthe next morning the fishermanpicked them up at the allotted time   & ferried them backit was a relief to be off the island;they never discussed their idea further,knowing instinctively that Rona   was not the place they dreamed ofBill Drummond recalls that the asking price for the island would only get you a flat in London; they were
flush from meddling in pop music at the time. Drummond later returned to Skye to work on a very different
project, The 17, described in the guide to Dùn Liath. 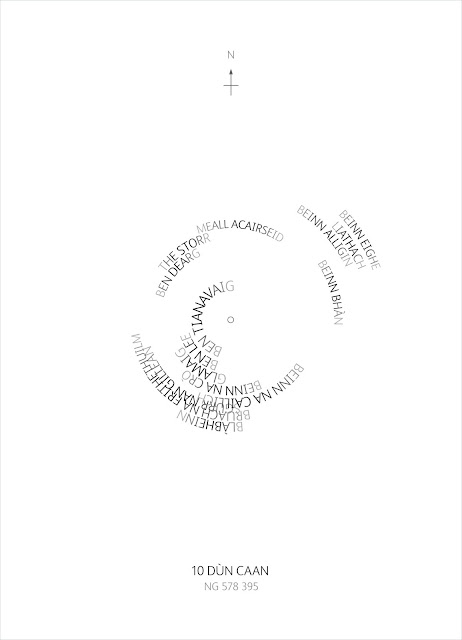 This conspectus is composed from the names of some of the mountains that  are
visible from this location. The centre-point marks the location of Dùn Caan.  The
typography represents the view as it is experienced by the human eye,  giving an
approximate impression of distance and scale. Mountain ridges are  indicated by
overlapping names. The gradation of hill slopes is suggested by  the use of grey-
scale, with the peak in black.

Click on this graphic to view the original and, if you wish,  print it out for use in
situ. A booklet containing all 14 conspectuses is available from ATLAS Arts. The
14 conspectuses have also been archived in an  album, indexed here. A complete
list of the mountains referred to in the Dùn Caan guide is given  below, with links
from each one to its OS map. English translations have been  given where possible.
A gallery of word-mntn drawings, including mountains visible from Dùn Caan,
can be found on the drawing page.