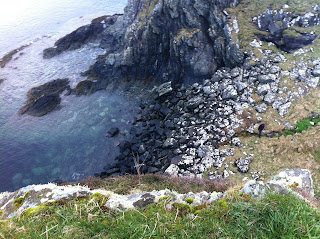 
let's begin with a pun, surveying the skye-line
from a cliff-top dùn, where viewing can discern design
deepening the meaning that hides within seeing
beyond even these far horizons

as with Dùnan an Aisilidh, Dùn Sgathaich & Dùn Liath
Bàn is a coastal dùn, perfect for a beacon flame,
set on a stack of rock, ideal for a defensive wall,
though now only bracken delays us on the path
above the cliffs of Port a' Chùil
where the boats are bobbing in a blaze of June sun


Dùn Bàn, The White Fort (grid ref: NG71SW 2). Site records can be viewed on RCAHMS.
The other dùns – Dùnan an Aisilidh, Sgathaich & Liath – have their own guides. Port a' Chùil
is sometimes translated as bay of boats, cùil, nook, and caol, kyle or narrows. 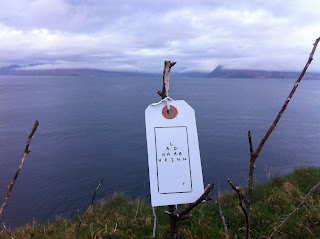 'one does not go to Sleat to climb mountains'

(SMC Guide: The Island of Skye)


Skye’s preeminent peaks are hidden from view
but north, south and east
còmhlan bheanntan, the company of mountains
sweeps across the mainland, from Knoydart
to Morar, Arisaig, Ardnamurchan & the Isle of Mull

imagine you could see through Beinn a' Chapuill’s ridge
to the dùns of Troddan, Grugaig & Telve,
the great ruined brochs crowning Gleann Beag
there are three peaks west of Beinn a' Chapuill
two form Beinn Sgritheall,
the third, Beinn na h-Eaglaise
south are the eminences of Beinn na Caillich
the arrowhead of Ladhar-Bheinn
& Stob a' Chearcaill

due west of the dùn is Meall Buidhe,
the yellow knoll,
and peeping over the skyline
above the port of Mallaig,
the crest of Mèith-Bheinn
sunk north of this peak
is Loch Morar's deepest freshwater

deeper than
the sea
as deep
as the ocean

south of Knoydart shine the silica-white sands
of Morar & Arisaig, which squeak as they sing,
looking south now, beyond Loch Ailort,
let your eyes settle on the widely-spaced summits
that crown Rois-Bheinn

this entire rugged skyline of Knoydart, Morar & Arisaig
is known in Gaelic as Na Garbh Chrìochan
The Rough Bounds
a name faithful to a region
devoted to the Jacobite cause
which was terribly cleared

a clear day's panorama over Ardnamurchan
reaches south to the caldera of Mull’s great mountains
the greatest, Beinn Mhòr, spewed out the lava
which froze in the basalt columns of Staffa & Ulva

The quote is from Malcolm Slesser’s SMC District Guide: The Island of Skye (Scottish
Mountaineering Trust, 1970). The mountain names are translated in the conspectus below. 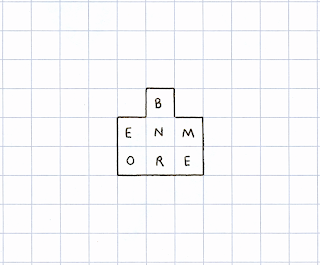 and points out
Beinn Mhòr


Isle of Eigg & Isle of Rùm 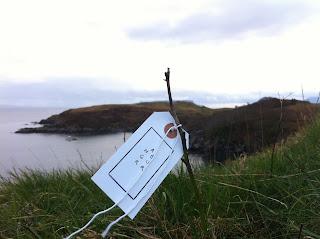 
the intelligence of Dùn Bàn’s position
can be seen if you turn and look over the horizon
of Sgùrr nan Caorach, south-west, to the skyline of Rùm
from this conspectus you can visualize
a complete Rùm traverse
scrambling south-north from Sgùrr nan Gillean
along the ridge to Ainshval
down Bealach an Fhuarain
to the twin tops of Trollabhal
across Bhealach an Oir to the highest peak,
the spear of Askival,
on to the boulder-strewn ridge end
at Hallival 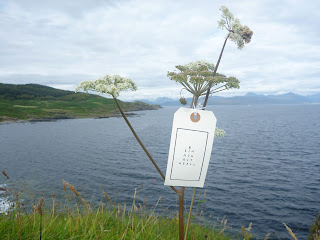 turn north-east, up the Sound of Sleat
there's another fort named Bàn,
twinned by dint of aspect and rock type,
both Bàns being white as a mark of the tumult
of schist & quartzite that ripples in the fault
of the moine thrust, through Applecross & Assynt,
to Loch Eriboll & Durness, threading an immense
vein from the garden of Sleat to the wilds
of the north coast

the far ruined fort stands above Sandaig point,
near Gavin Maxwell’s Camusfearna,
named for the bay of alders;
the house only survives in his three famous memoirs
of those years spent with otters

under the spell of desire the poet Kathleen Raine
came to Camusfearna, drawn by Gavin’s luminous aura,
she wooed him with votive offerings
of sea-shells and feathers, gifts which went unnoticed

sharing only one lonely night together in his bed
their bodies did not meet; Raine’s mind fantasized
a chimera of emotions revealed in her diaries,
to which Gavin’s only response was
I feel none of this


the ring was offered in vain; love turned
from frustration to wrath, and the curse Raine cast
under the protection of the rowan
which stood near the house


let Gavin suffer in this place
as I am suffering now

Raine’s abiding wound was regret, and the guilt
that her fatalistic thought imposed, as if her curse
had been the cause of the fire which
killed Edal the otter, and brought ruin
to Gavin’s retreat


Gavin Maxwell: see Ring of Bright Water (1960), The Rocks Remain (1963) and Raven Seek
Thy Brother (1969). The poem is an extract from Kathleen Raine's 'The Marriage of Psyche',
with place names local to Sandaig interpolated by AF; it was first published on the road north
blog. After the fire that killed Edal Maxwell had the cottage demolished. My account of
Maxwell & Raine's relationship draws on a conversation with Meg Bateman. 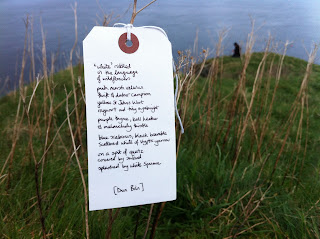 
Dùn Bàn, The White Fort,
named for the quartzite
it was built upon

white riddled
in the language
of wildflowers

some see a ruin
while others scent
a wild sea garden

this litany of flora, composed by Meg Bateman,
celebrates the flowers of this region

The Year’s Flowers
for my mother
who taught me their names
The first sign, a starry celandine,
shining through a lattice of broken stalks,
then my favourite, wine-heady primroses,
and anemones in quivering clumps by the burn
where violets flicker, and naked coltsfoot
stare unblinking at the watery sun,
and dandelions and marigolds blaze lusty
as Van Gogh’s sunflowers in craggy paint.

May comes in a blur of bluebells,
impossible to sidestep in field and wood
where fronds of bracken unfurl beneath them
and constellations of garlic turn above.
Bog cotton waves bright silk pennants,
snow piles high on hawthorn in the heat,
tormentil and bedstraw strew the meadows
with their minute rectilinear geometry.

Above its lime-green leaf corona
butterwort’s pansy-faces float in June,
and spikes of deep magenta orchids
and orange asphodel stud the moor.
Pale, purple-veined lady-smock
is favoured for cuckoo-spit in long fresh grass;
eyes of speedwell open wide on the world,
milkwort’s infant eyes are pinched and dark.

Architectural, angular, the yellow iris
blooms too briefly in bog and on shore
where stonecrop and thyme carpet the boulders
and sea-thrift springs straight from the rock;
pink sea-spurrey and sea-milkwort
spangle the shingle with their fleshy lobes
and your shoes scrunch on the sea-aster
growing on the flats in luxuriant mounds.

Powder-blue, floppy, crimson-spurred cranesbill,
valerian and woundwort grow tall by the burn,
with delicate stitchwort and globeflower like peonies,
and the utmost azure of forget-me-not;
in the dusky hues of old satins and damask
water avens hide below their burs,
and waterlily buds, like eggs in waterglass,
linger below the surface of the pools.

Rhododendron’s mauve is tinged with orange
of stigma and stamen as it blooms in the woods
where foxgloves meet in secret conventions,
their nipples dangling deepest pink;
and pink is the campion, the herb Robert,
and ragged Robin, straggling through fields
whose hedges are musty with sprays of elderflower
above tangled brambles in rose-like bloom.

Ox-eye daisies sway by the roadside,
purple clover cushions the verge,
walls sprout waxy saxifrage and stonecrop,
and butterfly orchids gleam candle-white.
St John’s wort, St Columba’s armpit,
opens its yellow flowers amid red buds,
and the umbelliferae, like nests in the ditches,
too numerous to learn, spread out like lace.

July comes with the scent of the dog-rose
and plumes of creamy meadow-sweet;
rubies dangle in fuchsia hedges,
blue vetch clambers though the apple tree.
Giddy with aggression, swords at the ready,
busbied thistles stand guard by the road,
rusty spikes of sorrel and bristling rushes
make punctuation marks on a page of green.

Heather everywhere makes August fragrant,
an exquisite carpet lies over the scree
where crowberry and blaeberry have cast anchor
by lady’s mantle’s seven-fingered leaf.
On a croft above Elgol, grass of Parnassus –
the jewel I’ve hoped to find all year,
its green-veined petals make a cup of honey,
five nectaries gathered in its base like pearls.

Yellow-rattle rattles at every footstep,
pom-poms of scabious bob above the turf;
the ragwort looks ragged, the bracken deflated –
no need now for the breast-stroke to part its fronds.
Strung between hardhead and fists of burdock
chandeliers gleam with beads of dew;
willow-herb takes the crimson baton from the foxglove,
and montbretia flares up at the opening of the schools.

With the onset of September the wind sounds different
as leaves of bog myrtle and birch grow crisp,
the thistles collapse in disarray by the roadside,
over the purple heather a brown tinge creeps;
yet among the hips, there are still roses,
among the blackberries, flowers still shine,
on top of its spur, another foxglove opens,
and Michaelmas daisies begin to bloom.

Like the low autumn sun, the last stragglers –
hawkweed, hardhead, scabious, rose –
are richly hued, but for the bindweed,
its pink candy-stripes incongruous in the cold.
With a hissing and tinkling, October showers
tumble on the loch and as quickly stop;
buzzards are buffeted as they ride on the currents,
rank grass is blown in swathes and flops.

All movement now and gaiety and fragrance
are not of the flowers but of falling yellow leaves,
as the land wraps her shaggy fur about her,
against salt spray, leaching, hurricane, ice;
when a season later by the snow-muffled river,
on a battered bank of pockmarked mud,
below beads of hail and broken bracken,
a galaxy of eight-pointed celandines burns.

the birch-thin separation
of layers of perceived reality

Kevin Henderson, May 2012
Stork and Hedgehog 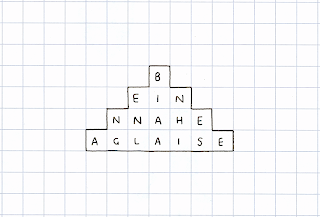 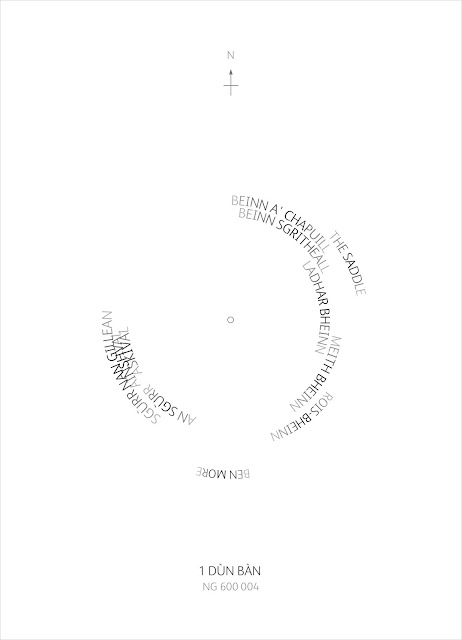 This conspectus is composed from the names of some of the mountains that  are
visible from this location. The centre-point marks the location of Dùn Bàn.  The
typography represents the view as it is experienced by the human eye,  giving an
approximate impression of distance and scale. Mountain ridges are  indicated by
overlapping names. The gradation of hill slopes is suggested by  the use of grey-
scale, with the peak in black.

Click on this graphic to view the original and, if you wish,  print it out for use in
situ. A booklet containing all 14 conspectuses is available from ATLAS Arts. The
14 conspectuses have also been archived in an  album, indexed here. A complete
list of the mountains referred to in the Dùn Bàn guide is given  below, with links
from each one to its OS map. English translations have been  given where possible.
A gallery of word-mntn drawings, including mountains visible from Dùn Bàn,
can be found on the drawing page.